TAMPA - A man riding an electric scooter was injured Thursday afternoon when he was struck by a semitrailer truck near Ybor City, according to Tampa police.

The truck and the rental scooter were both headed north on N 20th Street about 4:45 p.m. when the scooter veered from the far-right lane near the curb and rode into the path of the truck, Tampa police spokesman Steve Hegarty said.

The scooter rider suffered 'serious injuries' and was taken to a hospital for treatment. The truck driver remained at the scene and is cooperating with police, Hegarty said.

Electric scooters were introduced to Tampa's downtown May 25 as a one-year pilot program. Initially, they were limited to sidewalks and barred from a few no-ride zones, including the Riverwalk, Bayshore Boulevard and E Seventh Avenue in Ybor City. But this week, DeSantis signed a law lifting the restrictions, allowing scooters to legally operate in bike lanes and on streets.

Jean Duncan, the city's transportation director, told the Tampa Bay Times this week she was pleasantly surprised at the relatively small number of complaints generated by the scooter program so far. But the rollout has already encountered a few snags: During the first weeks of operation, people were seen riding the scooters in banned areas or parking them haphazardly and blocking sidewalks and entry ways. 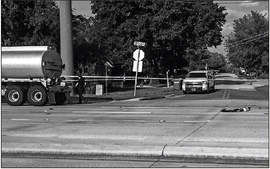 A scooter rider suffered 'serious injuries' and was taken to a hospital after he was struck by a semitrailer truck near Ybor City Thursday afternoon, Tampa police said.

Click here to see this page in the eEdition: